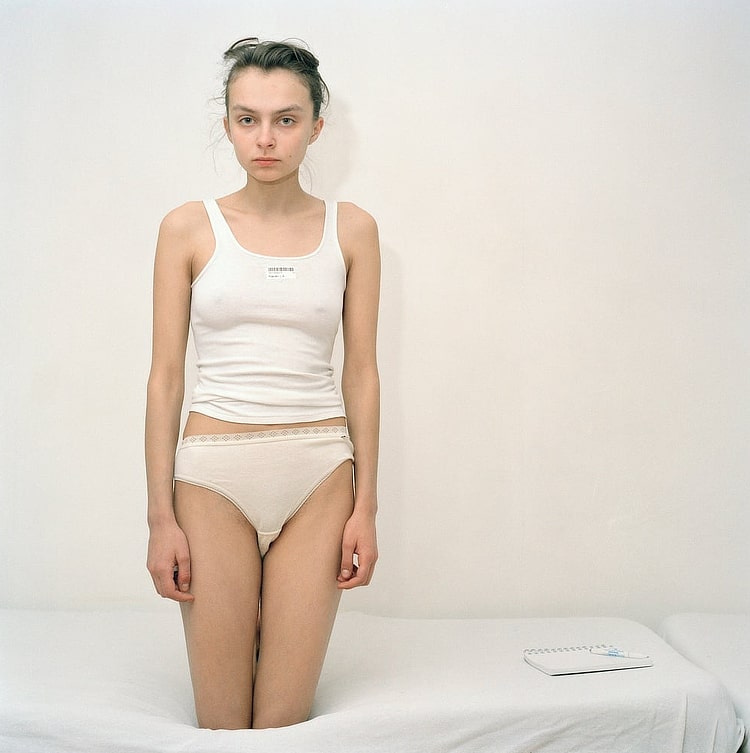 Liesbeth and Angelique Raeven (Heerlen, 1971) have been making confrontational videos, performances, photos, drawings and installations in which the twins often play the leading role themselves.  The sisters criticize the Western ideal of beauty by highlighting the malleability of the human body.  A love-hate relationship with food is an important part of this.

The English model Twiggy from the 1960s still sets the tone.  She is a very thin woman with large deer-eyed eyes where the eyelashes were strongly set with mascara.  We can't get rid of this ideal image, although in recent years frantic efforts have been made to change this image on the catwalk, in fashion magazines and in commercials by showing other, more chubby women.

The installation 5200 ml (2005) shows empty cartons of juice, low-fat yogurt and Diet Coke, next to a single mattress with a crumpled sheet and a broken saucer full of cigarette butts.  A girl is projected on the wall, drinking water and wine and eating low-fat yogurt in a short time.  A total of 5,200 ml a day, while about two liters is a healthy maximum.  More fluid leads to sodium deficiency, which is an attack on the heart.  After each intake, she writes down her weight and her findings in a notebook.  As the day progresses, she becomes angrier, she hates drinking water, and her handwriting becomes increasingly illegible.  The girl is constantly worried about her weight gain, although it decreases again when she has been to the toilet.

It's hard to watch the video, which is 64 minutes in total.  You would want to step in, take care of the young woman and give her a positive self-image.  At the same time, it also makes you angry, because this obsession is so self-centered.  Nothing else exists anymore, and life can't be about that anyway.  Therefore, it is rightly seen as a disease, an addiction.  It's about an excessive need for control, not just over food and liquid and weight, but ultimately over the image others have of you.