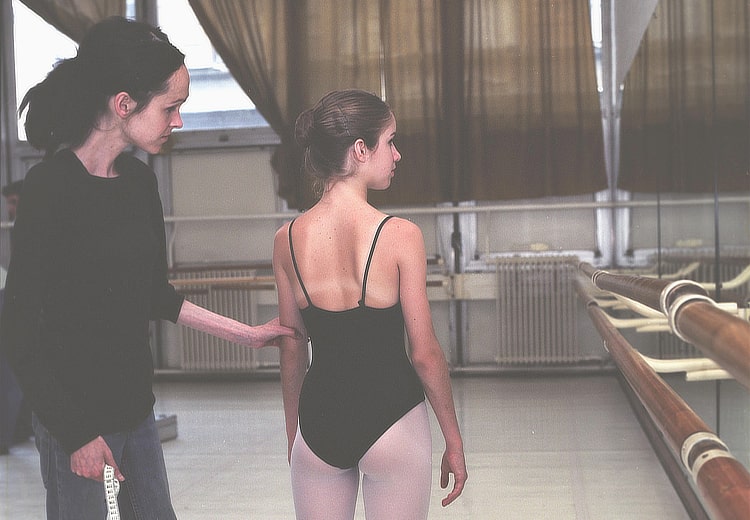 Little can be done to change a person physique. The body is a given, like height, ethnicity, and, on the whole, external appearance. All these naturally determined factors make the body what it is; some people are lucky with “Nature’s Choice” and have the correct build for ballet. But what about those who aren’t, and who desperately want to become professional ballerinas?

The ideal body type for ballet is that of a ten-year old girl. The shapes and curves of a woman’s body are considered unsuitable. In auditions, candidates are measured against that ideal and judged by their figure. Those who don’t have the right figure are advised to train harder. Being rejected makes one feel guilty, for not having sufficient strength to push one’s body to the limits or for not exercising with greater discipline in order to change one’s body.

This double-projection video installation shows Eszter (aged fifteen) and Barbara (aged fourteen) struggling to do their best. The story is told against the background of their ballet school (the Hungarian Dance Academy) in Budapest and was distilled from their experiences as well as those of other students.

At the same time when te supported erasure of boundaries between art and life has given rise to so many casual and perfunctory efforts simply to reproduce the real, L.A. Raeve go to the opposite extreme, insisting that art’s role may be fundamentally paranoid or at least compulsive one of impressing some order on the real, however arbitrary, by not only insisting on one’s difference but posing it as universal.”

Both the title and the work were inspired by the article by William Hamilton and passages on the ideal body type for ballet from Gretchen Ward Warren’s standard work.